From the outside, Schwartz’s journey to his spot on the Badgers List seemed like an anecdote. Schwartz was a star on Waukesha (Wes.) South High, playing with his father Bill Schwartz. He was a three-time All-State player, county career record holder and was the state’s top player of the year. He graduated in the top 5% of his class.

When it came to his recruiting, he only had the Badgers and Dick Bennett, who trained with his father years ago at the high school level. Bennett was beginning to build a winner out of a wasteland, and Schwartz was eager to join the crusade. committed before the start of his first year.

But not everything was as it seems. As a child, Schwartz exhibited behaviors such as washing his hands frequently and checking and rechecking appliances to make sure they were locked and doors to make sure they were locked. Early in high school, he was diagnosed with obsessive-compulsive disorder and was able to manage the condition better, but it still nurtured a perfectionist orientation that prevents him from being mentally healthy.

“For example, in high school, I could score 30 points in a game, but if I miss a few 3-point hits and our team wins, I’ll go home and that will stay with me and bother me,” he said. .

I followed him to Wisconsin. As a freshman, Swartz wasn’t able to contribute much on the field to a team burdened with juniors and seniors. At one level, he was aware that it was normal for the new student not to play much, but he was torturing him regardless.

“It was the pursuit of perfection at the time, I felt like a failure, and I let everyone down,” he said.

Feelings of failure, even when he was a member of the Final Four, prompted him to have suicidal thoughts. He left the team and school, and spent the following year talking about his condition and the strength he had gained from his Christian faith, a decision that drew coverage from Sports Illustrated, ESPN and NBC News, among many outlets. In a better place mentally, he returned to Wisconsin the following year in hopes of restarting his career, but his anxiety returned.

“It was a good time to just kind of get away, and I did,” Schwartz said.

He attended Carroll College (now Carroll University), a small school in his hometown of Waukesha, and helped train at his high school.

“I really felt like my first two years of training in high school was when I really fell in love with everything that coaching represented,” he said.

It was the beginning of the road to a life in training. He was an alumni assistant at Marquette, where he worked with coach Tom Crean, now in Georgia, and earned a master’s degree in school counseling there. He returned to Waukesha South as an assistant coach while working as a school counselor in a nearby school district.

During that time in Wisconsin, Schwartz often met on a weekly basis with therapist Terry Young, whom he described as the greatest in the world.

“What it really helped me do was just put my past into perspective and be able to use those experiences and understand why and so forth, and not just help me, but then for me to be able to use this,” Schwartz said.

Schwartz’s contact in the training clinic with Josh Pastner – then-coach in Memphis – led to him securing a position on his team with the Tigers. Schwartz came to Tech with Pastner in 2016, serving in a non-training position, but was promoted to assistant coach in Pastner’s second season to replace Darryl LaBarrie. He has frequently led recruiting efforts, including with the rookie trio of Tech Deebo Coleman, Miles Kelly, and Jalon Moore.

“Everyone has their own journey, their own path, and they have their own experience,” Schwartz said. “And I’m so lucky and lucky that I’m still a part of this game.”

Schwartz brings to the Bastner crew a personal experience that is especially valuable in today’s college athletics climate—a former basketball player in the Athletics Conference who has dealt with mental health issues while in the spotlight bestowed on a highly successful team.

“First of all, I think he’s an amazing person and coach,” said tech guard Kyle Sturdefant. “He’s always there outside of basketball, always an ear to hear and the voice of reason, not just for me, but I feel like I’m with all the guys.”

Schwartz said he was “very happy” that over the years, the mental health issue has become less of a stigma. In fact, on Monday, the ACC, Big Ten and Pac-12 announced the “Teammates for Mental Health” initiative to raise awareness of the importance of mental health and wellness.

Swartz took a particular interest in staying close to younger Tech players as they adapted to college basketball and often did not see the field or enjoy the same success they had in high school. In a culture that increasingly seeks instant gratification, Swartz encourages jacket players to have their own path and focus on what they can control.

Assistant coach Eric Revino described Schwartz as a “really good basic basketball coach”. Revino admitted that coaches can sometimes fall into the trap of seeing their players as athletes.

“But sometimes coaches have a problem when they don’t sympathize with who the player is, and Julian is good like that,” Rivino said.

Schwartz wasn’t enjoying Wednesday’s game with the Badgers. But it wasn’t because they were a part of his life that he didn’t want to go back to. Instead, there’s the emotional weight of competing against a team he’s long supported, and also, a Wisconsin bear playing against. And these are good reasons for not wanting to play Wisconsin.

“I’m just doing an excellent job,” Schwartz said. “Very well. (This is) No. 1. No. 2, I do what I love and what I’m passionate about, and that really really helps me.”

Wisconsin Team 1999-2000 Final Four. Julian Schwartz is in the front row on the left end, #42. (Image courtesy of University of Wisconsin Athletics) 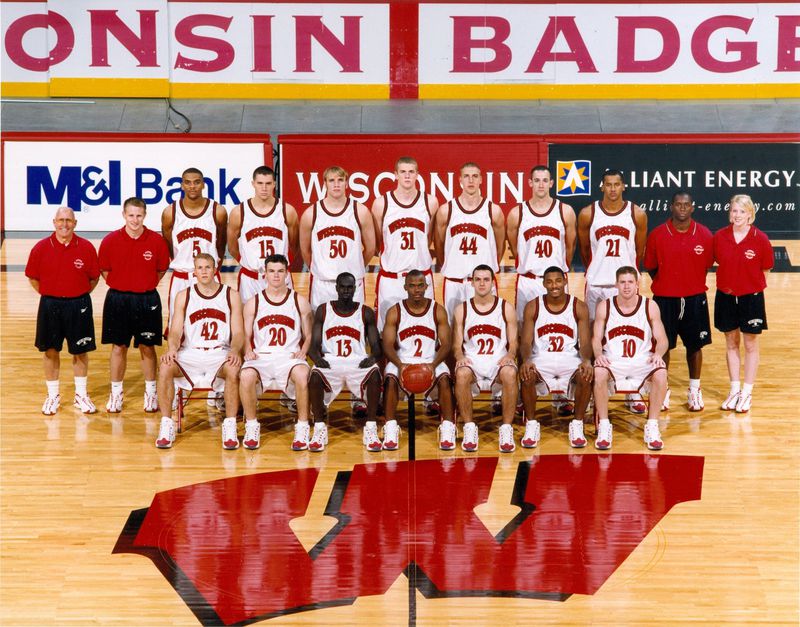 Wisconsin Team 1999-2000 Final Four. Julian Schwartz is in the front row on the left end, #42. (Image courtesy of University of Wisconsin Athletics)