Shocking images of the Duchess of Cambridge as a victim of domestic violence have been plastered across Europe as part of a campaign to end violence against women.

The shocking photo, which was manipulated without palace permission, shows Kate Middleton’s face covered in cuts and bruises and was seen at bus stops and buildings in Milan and the southern Spanish coastal town of Los Alcazares. 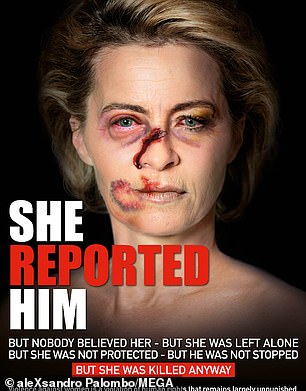 Kensington Palace was unaware of the use of the Duchess’s photo as part of the campaign, according to The Sun.

The large red and white letters next to each photo read: “I told him.

Kensington Palace was unaware of the use of the Duchess’s photo as part of the campaign, according to The Sun.

The images are understood to be intended to shock, rather than indicate which individuals are victims of domestic violence.

Italian artist and activist Alexandro Palumbo, who edited the photos, said he wanted to “draw attention to the bad reactions from politics regarding the problem of gender-based violence” and stress the “ineffectiveness of the support and protection system for victims”.

But some comments on social media criticized: You are not funny. Someone said: “Do not use pictures of women who have not given you permission.